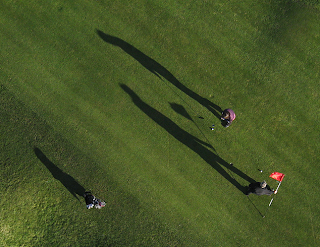 The days when Lyle and Scott jumpers were worn by Brucey, Tarby and Ronnie Corbett have long gone. Lyle and Scott has left the golf course and found new fans in the bar, the nightclub and the football ground
For most of Lyle and Scott’s 125-year history, its lambswool and cashmere sweaters have been a staple of the golf course; modelled by celebrity aficionados like Bruce Forsyth, Jimmy Tarbuck and – as seen on TV – by Ronnie Corbett.
Over the last couple of years, though, Lyle and Scott sweaters are more likely to be found on the backs of the twentysomethings in your local bar or nightclub – and, in a revival of 1980s “casual” styles, your nearest football ground.
Lyle and Scott: knitwear revival
There’s no doubt that Lyle & Scott’s revival is partly because of a change in golf’s image. Dour professionals like Nick Faldo and Colin Montgomerie, and Timmy Mallet-inspired dressers like Darren Clarke, the young Jesper Parnevik and the late Payne Stewart, have given way to a generation of golfers dressed by J Lindeberg. The sport is no longer considered the sartorial bombsite it once was, and the fashion world has taken notice.
Similarly, from the safe distance of two decades and a protective barrier of sepia-tinted nostalgia, the clothes and styles of 1980s casuals has returned to football grounds (but not often, these days, the terraces), and Lyle and Scott knitwear has taken its place alongside Adidas kagoules and Stan Smiths in the wardrobe of the style-conscious football fan.
The classic knitwear labels worn in the 70s and 80s are being appropriated by a new crowd wanting to emulate the look – and Lyle & Scott is at the heart of the revival.
Quality always in fashion at Lyle and Scott
There is a long-held maxim in the clothing world that fashions come and go, and only style remains – and that saying holds true with Lyle and Scott.
Ever since the Lyle & Scott eagle appeared on the cashmere sweaters in 1967, it has represented a well-tailored garment made with high-quality materials and now thankfully offers everything from jumpers to mens leather wallets.
Lyle and Scott use only the best lamb’s wool or cashmere for their jumpers, and its shaped fit is deliberately fashioned to give the clothes an appeal beyond the golf clubhouse. And while the company remains dedicated to its top quality precepts, Lyle and Scott will always have its fans away from the golf course.
Posted by blogcember at 06:36